Igor was born on 23/12/1966 in Varese (Italy) and he is a magician, illusionist, fakir.
He started to do shows at the age of 5 years in a circus.
At age 15 / 16 he was already living alone with a boy. A friend with whom he did shows
From 19 years up to 31, he attended a boy who mistreated him.
The mother died in 2006 and his father hanged himself in the garden two years after, for the his desperate lack of the wife.
Igor has undergone several surgeries including, export cavernous angioma in the brain, in 1986, export of nine lymph nodes in the groin and in 2013 was hospitalized for severe rectal bleeding.
Every day he now takes 10 pills in the morning and three in the evening.
He has reduced the numbers of shows and takes care of his animals, especially the 4 chihuahua Tatino, Venus, Zac and Jemy.
Since 1998 Igor lives with his current partner Luca, who is younger than 7 years, which he is often abroad on business. 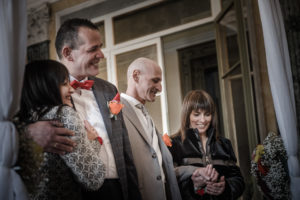